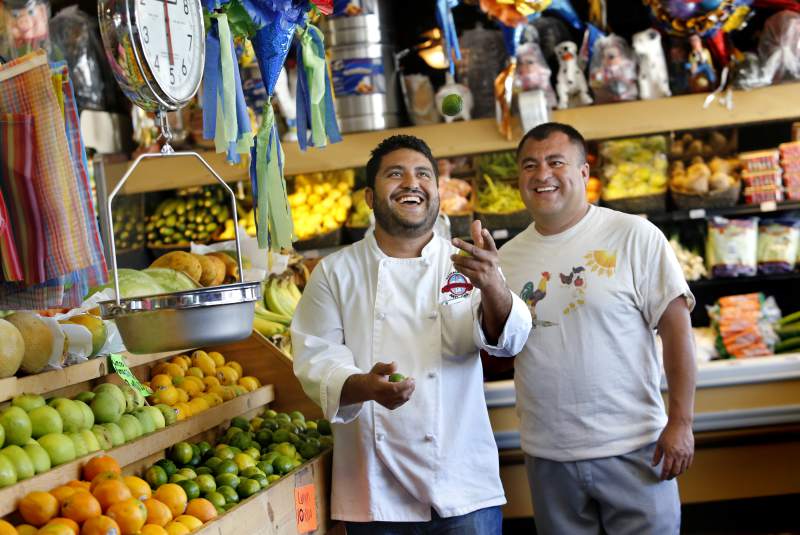 Brothers Octavio and Pedro Diaz are at the heart of a food powerhouse in northern Sonoma County, owners of three thriving restaurants and a Mexican market in Healdsburg and Windsor. Persimmon, the duo’s fourth restaurant, is a partnership with Executive Chef Danny Mai they expect to open in mid-November at 335 Healdsburg Ave.

Theirs is a classic story of Mexican farmers who came north from Oaxaca to learn new skills and wound up finding a way to blend the old with the new. The brothers found success by sharing their love of food and commitment to community, quickly becoming an integral part of Sonoma County’s culture.

“When we talk about our family and our culture’s love for food, we think about mole negro de Oaxaca,” said Octavio of the family’s signature dish. “Mole is about life and celebration. It is a mixture of many different ingredients, a mixing of traditions, and it is about people coming together.”

In that sense, it is a perfect fit for Sonoma County, but Octavio is quick to add that California isn’t the first to discover farm-raised ingredients, slow cooking and the appeal of handmade, artisanal cooking. That kind of aesthetic was entrenched in the culture of Oaxaca long before it became trendy north of the border.

“People from Oaxaca are the original foodies”

“People from Oaxaca are the original foodies,” he contends.

The Diaz family has roots in the southern Mexico state that is renowned for its vibrant, festive art and cuisine. Octavio, now 39, and Pedro, 38, were born and raised in Santa Gertrudis, southwest of the city of Oaxaca.

Santa Gertrudis is situated in the Valle Central, whose broad, verdant plains run alongside the rugged Sierra Madre mountains. This farming region has nourished Oaxaca since pre-Columbian times. Against the backdrop of this striking landscape and rich cultural history, Octavio, Pedro and their five siblings grew up working the land and cooking in a close-knit community.

When Octavio and Pedro discuss food, culture and community, they invariably return to their mother, Juana Ramirez, who taught them to love preparing and sharing meals.

“Growing up, all our chores revolved around preparing a meal,” recalled Octavio. “One person’s job was to collect wood for the fire, others grew the vegetables, someone else made masa and tortillas or salsa.”

Added Pedro, “Our mother and father and aunts and uncles all cooked. We grew up in a community where we all worked, cooked and celebrated around a large table together. My mother taught us to make cheese when we were about 7 or 8. You have to know the right time to milk and how to milk.”

In 1989, when Octavio was 13, his parents sent him north to Rohnert Park to live with his uncle, Fito Ramirez. “My parents wanted me to come to the United States to learn about farming so that I could go back to Oaxaca and take care of our land and animals,” he said.

Octavio was a good student and benefitted from his uncle’s guidance. He graduated from Rancho Cotate High School and received a Doyle Scholarship to attend Santa Rosa Junior College. There Octavio realized that his interests lay in food and hospitality, and gradually his plans for a future in Sonoma County began to take shape.

“I’ve always enjoyed working with people, and at some point I decided to stay here and make a go of it,” he said. Meeting his future wife during this time also helped cement the decision, as did the familiarity of Healdsburg’s town plaza. It reminded Octavio of the zocalo in Santa Gertrudis and Oaxaca.

“When you sit in Healdsburg’s plaza, you can breathe fresh air,” he said. “You see kids eating ice cream and families enjoying time together. It is the same in Oaxaca. In the zocalo there are people sitting outside, enjoying espressos and agua frescas, getting their shoes shined.

“Healdsburg’s plaza reminds me of my home, and it made sense to begin our new life here.”

Pedro had joined Octavio in Rohnert Park in 1995, and they began working at local restaurants while Octavio took classes at SRJC.

“I began as a dishwasher, worked hard and never focused on the pay or number of hours,” Octavio said. “I just wanted to do my best and learn from the best.”

His efforts paid off as he rose from banquet captain to director of outlets at the Sonoma Wine Country Hilton in Santa Rosa, then a food and beverage manager at the Sheraton Petaluma.

Meanwhile, Pedro opened “El Patron,” a mobile taco truck based in Windsor that laid the groundwork for the brothers’ future as entrepreneurs.

“By this point, we knew we wanted to own a business,” said Pedro. He kept his ear to the ground for a brick and mortar restaurant. When El Faralito went up for sale in 2002, he made an offer on the little Mexican restaurant one block from Healdsburg’s central plaza.

Pedro refocused the menu and ambiance, introducing the original Oaxacan recipes from his mother’s kitchen and adding a cocktail and tequila menu. By this time, most of the Diaz family had immigrated to Sonoma County, and everyone worked together to make El Faralito a success.

By 2010, the family was ready to branch out. In April, the owners of Hot Tomatoes in Windsor called Pedro to see if he was interested in their space. Pedro had worked there as a busser and server when he first in California, and he loved the community.

He didn’t think twice about buying the restaurant, renaming it El Faralito and installing El Rey, a tequila bar. The restaurant now has a large local following along with tourists who come via word of mouth.

The next month, Octavio left his position at the Sheraton Petaluma to open the family’s third property, Agave Restaurant and Tequila Bar a mile south of the Healdsburg Plaza. With him at the helm, it also serves traditional Oaxacan food such as chapulinas, tlayudas, mole and mescal.

“You could say that El Faralito is a little more gourmet and wine country, but Agave is completely Oaxacan, and the menu is completely my mom’s and grandmother’s recipes,” Octavio said. Oaxacan style whole black beans replaced Tex-Mex refried beans, for example, and the mole served in each restaurant is handmade by Juana Ramirez.

“Everything is handmade and authentic, things we made growing up,” said Pedro. “We use vegetables from local farmers. And, even if we move towards wine country style at El Farolito, we don’t forget our techniques and our roots.”

When customers began asking to buy mole to take home, the brothers embarked on their next project. Also in 2010, they opened Casa de Mole, a Latino market and taqueria that also sells their mother’s authentic Mole Negro de Oaxaca. The store is operated by a third brother, Francisco, 32.

Before agreeing to make her mole, Juana insisted that ingredients come from the farms in Valle Central. Today, the chilles, oregano, chocolate, almonds, raisins and cinnamon come from famers who are the Diazs’ neighbors back in Santa Gertrudis.

The Diaz family also believes in supporting its Sonoma County neighbors. Pedro and Octavio often lend a hand to people who ask, from the Latino community, local schools, scholarship funds or chambers of commerce.

“Even when we don’t have to say yes, we still say yes,” said Pedro. “It feels good to know that you have helped someone. It is the same as cooking. When someone enjoys what I cook for them, it motivates me to do better and do more.”

Octavio agrees. “Small businesses are what make a community. If we are kind to each other and help each other, then we all succeed. If you are not involved in your community, then you will always be an outsider.”

The Diaz brothers’ commitment to community and cooking may come from their Oaxacan roots, but it doesn’t end there. Mixing traditions and collaboration will be the hallmark of Persimmon, the Southeast Asian-themed restaurant they will open soon in partnership with Danny Mai.

“Danny is like my brother from another mother,” said Octavio with a laugh. They met while Mai was the executive chef at the Sheraton in Petaluma. “We both came to this country when we were 13. In both our cultures, food and family plays a big role. And, we are both inspired by our family recipes.”

The Diaz brothers will share operations duties, with Pedro managing the front of the house, and Mai serving as executive chef. Although the menu will depart from traditional Oaxacan fare, Octavio and Pedro say it will draw from the same guiding principles they learned in their family home.

“In cooking, as in life, it is about getting the ingredients, the process and the family,” said Octavio.

Adds Pedro, “I remember my grandmother making the most simple little taquito, a tortilla with beans. It was the most delicious thing I ever tasted because it is made with love.”